Home » Do You Need a Defamation Lawyer? Our Guide on Defamation 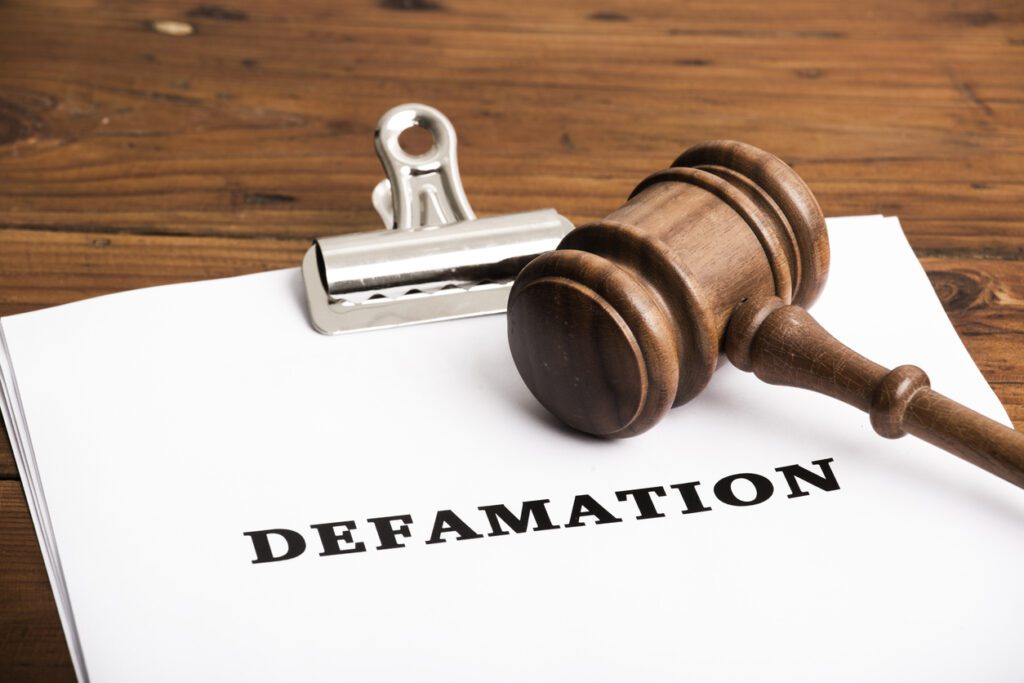 Online defamation can harm your digital reputation. A defamation lawyer can help you restore your good name online.

Anyone that posts false statements online (Instagram, Twitter, Facebook) in order to harm your reputation and cripple your business is considered internet defamation. These defamation cases are really taken seriously because anyone can access and see those posts that have been written about you online.

Defamation is a legal term that includes both slander and libel. It’s defined as the publication of a false statement that has the potential to harm the reputation of other people. There isn’t a precise answer on what is considered defamatory content because the nature of comments that can cause damage to someone’s reputation can vary widely.

If you make a negative comment about someone’s morality or honesty it can be considered defamation. On the other side if you go and insult someone to their face it will not be considered a defamatory act because those comments should be shared with a third-party member.

What is Defamation Law?

Probably everyone already knows that words can be very powerful and in some situations, they can become really destructive. Fake or false statements that are made by other organizations or a single person can make a lot of problems to your personal life, reputation, and business.

The part of the law that is taking care of similar situations is called Defamation and it covers both – libel (printed defamatory content), and slander (spoken defamatory comments).

What are the consequences if someone commits Defamation?

People that tend to commit online defamation could be sent to a court and sued. In such situations, the consequence for proven defamation will result in a court order that will require a certain amount of money to be paid to the person that got defamed by the person who made those defamatory comments.

It will not be possible to make precise information on how much money the court will request to be paid because the defamatory cases can be different and a lot of other facts can come into play. For example, when someone successfully proves defamation, he can receive compensation for harm to their reputation, and feelings, and also for losses that happened because of the defamatory comments.

It is important to know that any amount of money that you claim in the losses and expenses category must be proven. This means it must be connected to a specific number (amount of money). For example, if you prove that your business had a loss of 30% on its sales because of that defamatory content, you can go on and sue that person who made those defamatory comments for the amount already mentioned.

This amount requested can be decreased in situations when the defendant apologizes. On the other hand, you can request a bigger amount of money in a situation when the defendant’s behavior is particularly bad in the court’s eyes.

Why do you need a Lawyer?

It can become very challenging to make defamation cases from content posted by individuals with nicknames, hidden email addresses, and stolen pictures.

Because of that reason, you will need to be represented by a law firm and team of lawyers that have great experience in handling internet law cases (defamation claims, false allegations, character defamation, and more).

If you want the best outcome and your case to remain valid you will need to prove the defamatory statement and go against the freedom of speech element.

Before they make any decision a lot of people would ask how much it will cost them to hire an internet defamation attorney. You should know that a high percentage of attorneys that represent people who were harmed by online attacks (plaintiffs) are working on a contingency fee basis.

This contingency fee is paid to an attorney only if you receive a judgment in your favor and the attorney gets a percentage based on the net recovery plaintiffs will get. If you want to know more precise numbers then you should expect something between 20% and 50%.

The amount that you are going to pay to your attorney also depends on how fast the case will be resolved.

Individuals that are acting as defendants in defamation cases are often getting charged hourly. In these situations, they are sending monthly bills to their clients with information about the number of hours they worked together with all other expenses. In most cases, attorneys are asking for an advance fee in order to secure their services.

A big percentage of people are not aware of how costly defamation cases can become. Because they are fact-driven they are additionally expensive and a lot of money should be invested in building the case through interrogatories and investigations.

Many of those defamation cases are requesting the proof of “true” damage that the plaintiff suffered considering their business, profession, and property and additionally include possible expenses that the plaintiff had to pay because of the defamatory statements against him.

It is very difficult to add a monetary figure so you can value the harm to your reputation or your business. You are probably going to have calculations of the damage you experienced, but the tricky part is to prove it.

In these situations, many people decide to hire an expert witness who is able to observe and make an assessment of the damage that was done. You need to know that expert witnesses are expensive, especially in the situation when they need to testify at trial. In most cases, the attorney will cover these costs, but if there is a settlement in your favor the attorney will refund those expenses.

How to prove Online Defamation

For a lawsuit to be successful you will need to prove some kind of damage that happened because of the content in question. For example, if you prove that you lost a job opportunity, or lost business because of the defamation content you will have a great chance to win that case.

You need to know that handling an internet defamation case on your own will be very difficult and it will drastically lower your chances to win the lawsuit. This is mostly because navigating the legal system is very complicated and doing it on your own will just add more expenses.

What is classed as a publication?

In defamation law, anything conveyed to a third party can be considered a “publication”. This material must be communicated or published in pictures, orally, or in writing. The publication can happen mostly on social media (Facebook, Instagram, Twitter), emails, group chats, posters, newspapers, electronic newsletters, books, or can be broadcasted on radio, television, or even spoken to a group of people.

In order for a person to pursue a defamation claim, the action must commence within one year from the publication of the defamatory content. You will not be permitted to start a defamatory proceeding after one year.

There is an option for the court to extend this time limit and it can be extended up to 3 years from the publication date.

Need some help with negative content online about your business? Click here for our top ten reputation management companies that can help today!